Hello!  If you're new here you may want to visit the Travelogues page in order to read this series about Newfoundland in chronological order.

The sky was bright and blue but the cold wind howled nonstop each day and huge waves, driven by the high wind, crashed along barren, rocky shores.  Small hardy evergreens dotted the landscape in sheltered spots, but much of this ruggedly beautiful area has little more than low bushes or grass, and broad expanses of bare rock and gravel.  As temperatures dipped into the 30's at night, with an almost continuous 30-40mph wind, we were glad we had splurged on a tiny but modern and stalwart cabin in the village of Burnt Cape for this section of the trip.

Almost 2,000 miles northeast of upstate New York and home, we at last found ourselves at the northernmost extent of our journey.  In the communities here we found that the Newfoundland accent, which was a delightful facet of the provincial culture all along, actually sometimes became difficult to understand, particularly when trying to follow a conversation between Newfoundlanders.  Not only were words spoken differently, but conversations were liberally sprinkled with words unfamiliar to us.  In this area too, the all-purpose stores that are found in most towns reached dramatic new levels of utility, with patrons able to purchase just about any staples from baking soda to nails to DVDs to coffins.  But fresh meat was not in evidence, and there were few fresh vegetables.

Icebergs are fairly common in the late spring and early summer along the northern coasts of Newfoundland, an area known as "Iceberg Alley", and we set out iceberg hunting. 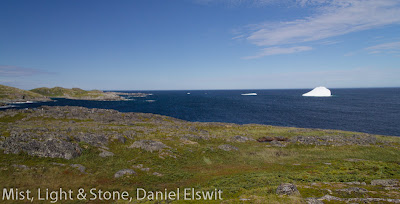 Some years are more dramatic than others.  In one of my earlier trips to the province in early July of 1991 I saw huge numbers of icebergs, large and small, creeping through the Strait of Belle Isle, starting just north of Gros Morne, and at the northernmost tip of the island the bays were completely filled with ice. This year was quite different, with only a handful along the entire coastline, mostly near the major population center of the northern part of the Peninsula, St. Anthony.  A suggestion for anyone headed up this way during Spring or early Summer - check out the Iceberg Finder website at: http://www.icebergfinder.com/ to learn where the bergs are that year.  Also consider a boat trip out to see icebergs (and whales) close up.  But bring some method of keeping your photo gear dry!

Talking to various people along the way we had heard regular rumors of a huge iceberg off the shore near St. Anthony, and we had high hopes of seeing it.  Many small communities in Newfoundland seem to encourage visitors and there are lots of thoughtfully placed paths and benches, with a great deal of signage directing visitors to vistas or other interesting features.  It was from a windswept bench high on a rocky hilltop near the village of Griquet that we enjoyed some of the best iceberg watching.

We spent the day roaming the hills to the north of the town along the ocean and sighted several bergs, including an extremely large one several miles off shore.

Toward evening we headed for St. Anthony, dinner, and groceries, a modest-sized town, but quite cosmopolitan in comparison to every community we had seen since Corner Brook.  Following dinner, it being only 6:00 or so, and with a good 4 hours of light left, we set off for what appeared to be a promontory at the mouth of St. Anthony's ample harbor, by a small lighthouse.   As it turned out, this was a highly popular park and a favorite location for both iceberg and whale watching!

Photography, particularly landscape, wildlife and travel photography, is very often about being in the right place at the right time, with the right lighting conditions.  When we reached the lighthouse we were greeted with an amazing sight.  Across the harbor stood a mammoth iceberg, just a few hundred yards off shore, and in the middle of the harbor's mouth, several whales spouted!  Unfortunately from a photographic standpoint, we were in the right place at the right time, but with less than ideal lighting - an overcast evening, but the results are certainly memorable if not fine art: 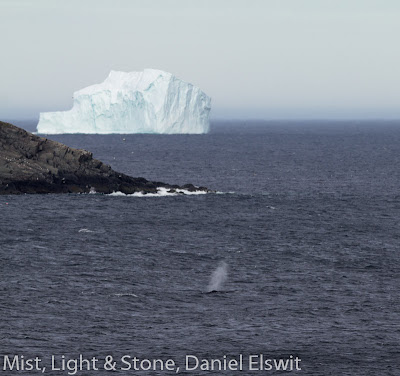 One of the biggest photographic challenges of this area for me was the very bright sky (and even brighter icebergs) and the deep blue, almost black sea.  A graduated neutral density filter, which can be used to darken only sky while leaving the sea untouched was a critical piece of my equipment.  Shooting in Raw mode also allows a great deal more tonal range than shooting JPEGs.  I've found that, with Raw images, I can frequently pull extensive cloud detail from overexposed white and featureless skies.

Just to provide a comparison with the astonishing amount of ice that was present in this same area at the same time of year in 1991, I close with this scan of a 35mm slide from that earlier trip: 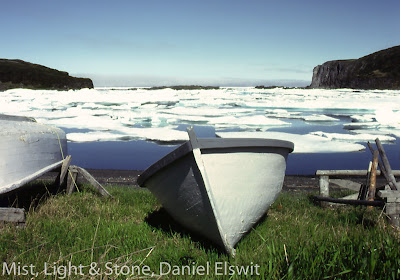 Next time: one last segment of the trip, to the picturesque village of Rose Blanche.