Continuing our tour of gorges in winter... Watkins Glen isn't just about race cars!  There is a "glen" in Watkins Glen, for which the town is named.  The glen is an amazing narrow, serpentine crevice, winding 400 feet up past 19 waterfalls and 200 foot cliffs.  For the photographer, endless opportunities abound among the natural scenery, as well as the beautiful CCC-era stonework of the paths and bridges.  Each gorge in the Finger Lakes seems to have its own personality, and this one seems deeply mysterious and other-worldly to me.  Of course, on a fine summer day when it's filled with hundreds of people, this popular local attraction does lose some serenity!  I've found three ways to avoid the crowds myself - go mid-week, preferably before noon (the gorge faces roughly east so it gets in the morning).  Alternatively, go in the rain (actually some of my best shots have been on days when it's lightly raining).  Lastly, go in the winter.  A good way to access the gorge in winter is by parking at the South Pavilion.  Walk down behind the pavilion itself, to the bridge across the gorge for a great view down to the stream.  All trails in the gorge itself are closed in winter, but the bridge connects with the Indian Trail which runs along the north rim and which is open, affording some great views.  The first photo below is from the bridge looking east, and the second, from an overlook on the Indian Trail.  To see more photos of Watkins Glen, click here.  Note that one of the photos at that linked page is shot from the same spot on the Indian Trail, but in the fall! 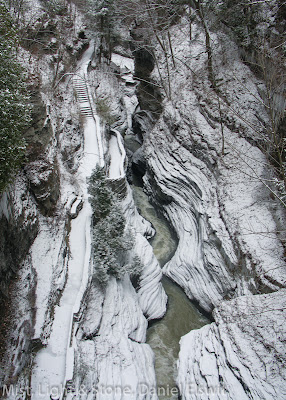 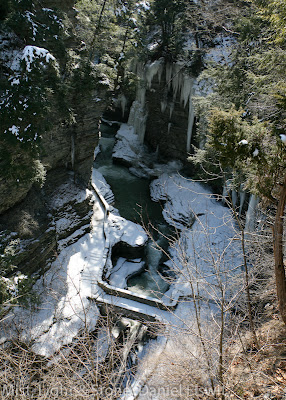