Sapsucker Woods is a bird sanctuary in Ithaca owned by Cornell University, home of the the Cornell Lab of Ornithology.  There is a beautiful visitor's center and a number of trails including one around a large pond with numerous bird viewing possibilities.  (Click here for more information on Sapsucker Woods.) My wife and I thought we'd go for a quick walk after work and before dinner, and since I'd been wanting to get some more experience with the "new" 400mm lens, Sapsucker was an ideal location.  Betsy could walk the trails while I toodled along by the pond. This was the first time out on a trail with the 400mm lens, and I must confess, it was more awkward than I'd anticipated, and after the first set-up and take-down, I left it on the camera, on the fully-extended tripod, and just carried the whole assembly around.  Fortunately, late in the day on a Friday, the trails weren't exactly brimming with people, so I had no opportunity to poke anyone unexpectedly with my gear.  About a third of the way along the trail around the pond I stopped at a viewing station that had an excellent view to the east across the water, lit nicely by the late afternoon sun.  After a somewhat frantic day at work it was a little hard to settle into a peaceful state where I was atune to what was around me, but eventually the natural world began to seep in and I stood for a good 45 minutes just taking it all in.  Somewhere along the line a heron swooped in low over the water, landing on an old nest high in a dead tree.  It stood there, motionless, for quite awhile, then it was joined by another heron, apparently its mate.  Evidently they were shopping for a nest, and that one wasn't their style, so they both moved on to another old nest, high in a different tree, where they remained until after sunset.  They were pretty far away, but the 400mm got them quite a bit closer, and some cropping of about 50% or a little more made these shots possible. 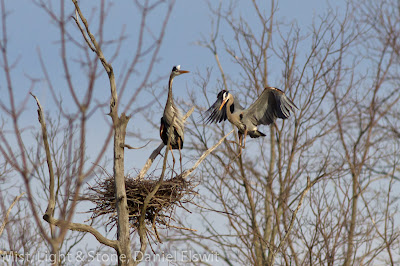 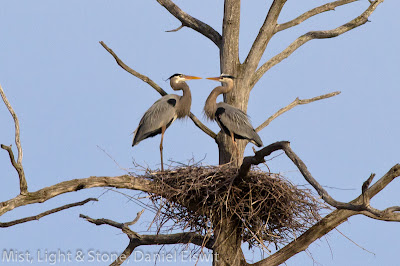 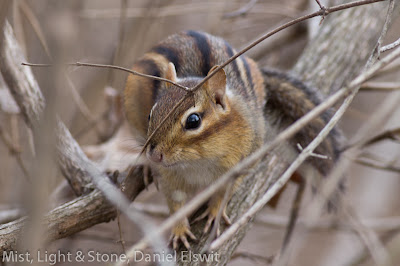