Sometimes a mistake can lead to some interesting creative exploration and even, perhaps, a pleasing image.  Two posts ago I illustrated a shot taken of a small stone building where I had bumped the tripod as I took the shot. Along those same lines, last summer, during my "weekend of the rental Panasonic GH2", I had a similar experience.  I was in a swampy area and it was excessively buggy.  At one point I was trying to take a shot in a fairly dim area, with a longer shutter speed, while being assaulted by mosquitos.  I ended up accidentally pressing the shutter as the camera spun about 90 degrees clockwise as I flapped my arms around trying to clear the bugs away from my head.  Here is the result: 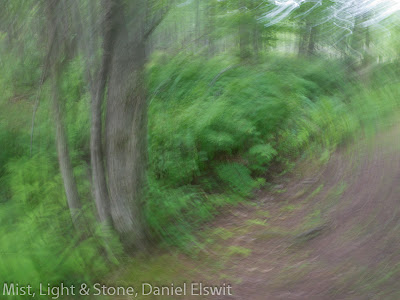 With my finger on the delete button I paused a moment.  It was kind-of an intriguing shot, and compositionally, on some level, it worked for me in an otherworldly sort-of way.  I left it and walked on.  The more I thought about it the more I wanted to try to duplicate that effect.  In fact, it was quite tricky to do.  I'm really not sure how it happened the first time!  But here are the results of my efforts a bit further down the path (by the way, I did come to realize that other people tend to give wide berth to a photographer taking photos while waving the camera around wildly.)

This one is interesting in part because the center is quite sharp!  Almost like a lensbaby effect. 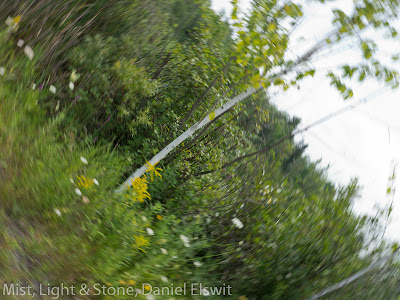 This last one is definitely a bit more like going down the rabbit hole! 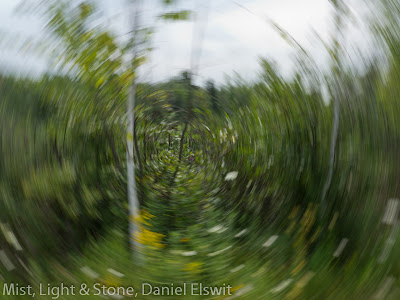 The general idea was to use a longish exposure, and rotate the camera very quickly at the exact same time as pressing the shutter.  The original shot was 1/5th second, the second at 1/200th, and the third, at 1/20th.  It's amazing how far you can move a camera in a 20th of a second!