The polarizer: the magic autumn filter

If you only own one filter, make it a polarizer.  Polarizers, in short, remove reflections and glare.  The effect varies depending on what is being photographed, how high the sun is, and what direction the camera is facing, but in general, skies become darker, allowing clouds to be more prominent, glare and reflections disappear from water (allowing a clear view into streambeds among other things), and makes colors more vibrant and increases contrast.  This is a wonderful filter to use to bring out autumn color.

Note that there are two types of polarizer filters: linear and circular.  Modern cameras require a circular polarizer in order to focus and meter properly.  Circular polarizers consist of two filters fastened together, one of which fastens to the camera and the other rotates freely.  Rotate the outer filter to acquire the polarization effect.  Polarizers work best at an angle facing 90 degrees from the sun, but the effect is still strong for some distance around the 90 degree mark. The effect of reflections on water is also affected by the angle of the camera to the water surface.  Shooting down on a body of water from a height will yield a more dramatic effect than shooting horizontally across the surface.  Fortunately you can see the polarization through the camera, so you can try various adjustments and angles to get the desired effect.

Below is a shot of Tupper Lake in the Adirondacks of New York, in the late morning, using a polarizer.  Although this shot illustrates the use of a polarizer to enhance skies, it also illustrates a potential pitfall of using a polarizer, especially with a wide-angle lens.  Due to the wide angle and also the angle I was facing, the effect is not uniform, growing darker to the left side.  While this can be corrected in post-processing, naturally it's ideal if the polarizing effect is more uniform.  Due to the low-angle to the water, the reflections on the lake were darkened but preserved. 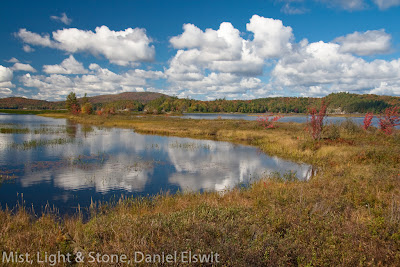 Most commonly, a polarizer is used in an open space when the sun is out, but just because you're in a deep forest or it's cloudy doesn't mean you should put it away.  Experiment!  Since they eliminate reflections on foliage, a polarizer can highlight forest scenes and autumn color, and although the effect is more subtle, they can have a beautiful enhancing effect even under lightly overcast skies.

Here's a shot taken at Fillmore Glen, in Moravia, NY, under overcast skies with a polarizer.  Note the lack of reflections in the water allowing the stream bottom to be visible, and the vibrant colors (which were not enhanced in post-processing): 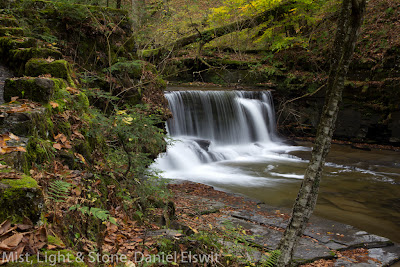 ﻿
Here's a pair of "before and after" shots from Fillmore, without post-processing other than sharpening.
First, without the polarizer: 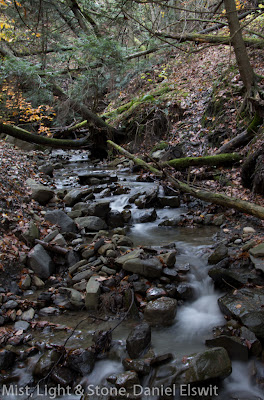 And now with the polarizer: 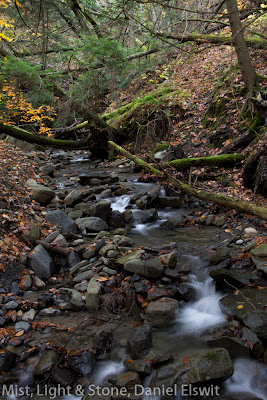 Be aware that a polarizer also has another effect that may or may not be desirable... It adds about 1.5 stops to exposure time, necessitating either a wider aperature or a longer shutter speed!