In 1889, the people of Rocky Harbour were each contributing one pint of oil every week in order to keep a lamp lit in a fisherman's house as a navigational beacon at the entrance to Boone Bay.  The bay was well traveled even then, with several communities along two fjords that split from the bay further inland.  The people expressed concern to the government regarding the lack of a proper beacon and at last, in 1898, the Lobster Cove Head Lighthouse began operation.  From that year until 1970 there have only been three lighthouse keepers, the last leaving shortly after the light was automated in 1969.  It still serves each night, on a picturesque promontory above the bay, and is now also a historic site in Gros Morne National Park, complete with a museum and picnic area.
﻿
﻿ One evening, while staying in the town of Rocky Harbour, we trundled down the short winding road to the lighthouse across the bay from the town, to catch the sunset light.  The weather seemed odd, with low clouds over the lighthouse, town and mountains behind us, but with a clear sky over the water to the west that allowed the sunset to light up the underside of the clouds in bright purples and oranges.  (Note to photographers: because the water is to the west it's difficult to get a pleasing shot of the lighthouse lit by sunset light without being in a boat!  This would likely be a magnificent location for dawn photos.  Sadly the weather was often uncooperative in the early mornings for sunrises.)

As the sun drew near the horizon a stunning display of bizarre weather unfolded before our eyes.  First the clouds turned almost flourescent pink and the lighthouse turned on.  A number of people sat on the rocks below the tower and, making the best of the situation, I started to shoot a series of close-in shots of the lighthouse, cropping out the nearby people. 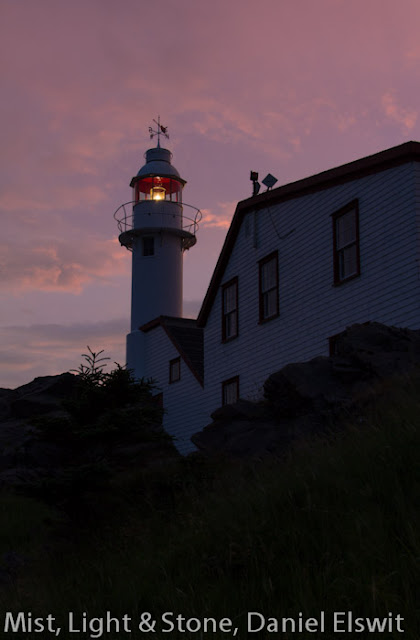 To my surprise, after a time, people on the rocks suddenly began to turn around and point toward me, not far away, my tripod planted in a small clearing.  This seemed a little unusual and I felt a bit self-concious and began to pack up to move to a different spot.  As I turned around I realized the people weren't pointing and staring at me.  A huge storm had rumbled in over the mountains to the east, and, combined with the light of the sun at the horizon, was creating the most enormous rainbow I've ever seen.

The closer the sun is to the horizon, the larger the rainbow, and at this moment the sun was almost touching the horizon. The rainbow grew brighter and brighter, and then a fainter, but still clear second, rainbow appeared, outside the first, until two full arcs stood above the heads of the astonished onlookers, with the background lit with the magic light of sunset, and the oncoming storm in the background.  I stumbled frantically up an embankment where I could get a clear shot, but a pleasing composition was elusive (as seen below!)  Still, it was a remarkable moment.
﻿ ﻿ 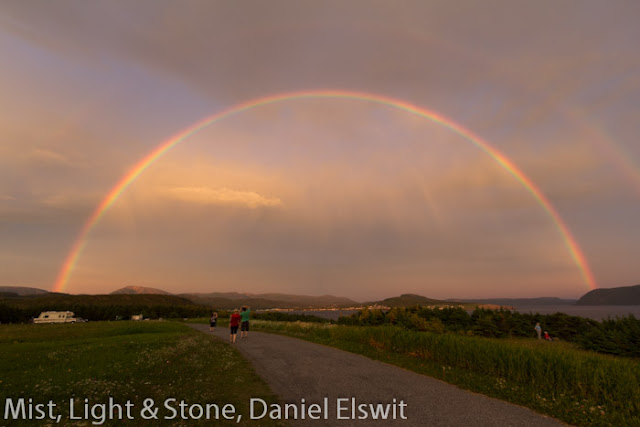 ﻿﻿
A few moments later, I turned around to see the sun slipping below the horizon.﻿
﻿﻿ 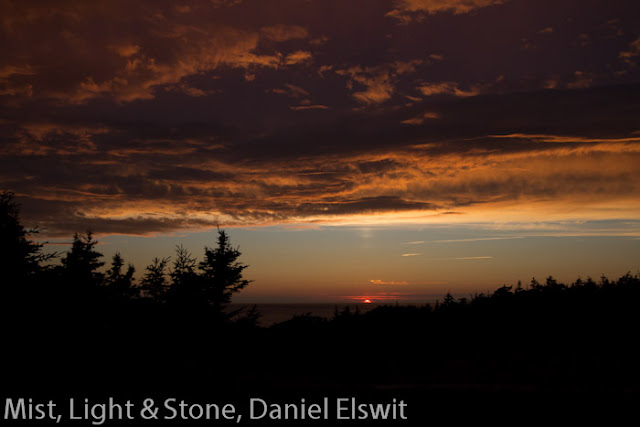 ﻿﻿
﻿As the sun faded a clap of thunder and spattering rain announced the onset of two days of rain, but I did have another evening at the lighthouse later, with a much less dramatic, but still beautiful evening.﻿
﻿
Next... Western Brook Pond, and a boat ride down an ancient fjord, now a land-locked lake.