Undoubtedly the most well-known place in Gros Morne National Park, and indeed one of the iconic locations in all of Newfoundland, is a lake in a deep canyon leading about 10 miles into the Long Range Mountains, called Western Brook Pond.  Once a true salt-water fjord, at the end of the last ice age, as the glaciers melted, the land rose to cut off the sea, and now the area is a long, freshwater lake that winds through the mountains, bordered by 2,000 foot sheer cliffs. 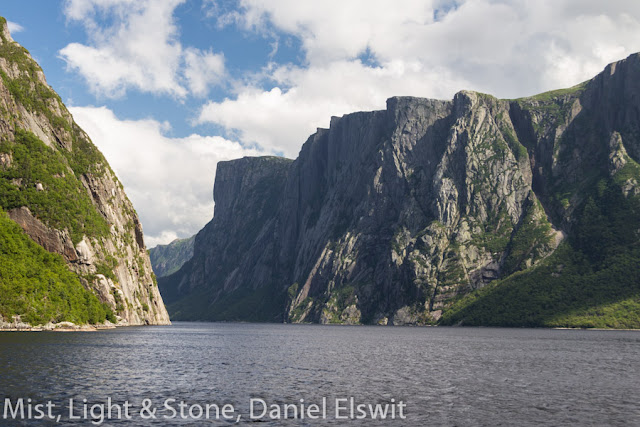 As with the Tablelands (see part 5), hardy adventurers can venture into the wilderness here, on an unmarked 5-day odyssey known as the "Long Range Traverse".  An orientation to the dangers of hiking in Newfoundland's most rugged area, followed by successful completion of an exam, is required for all hikers before setting out, and only 9 hikers are allowed per day!  Not equipped for backpacking this trip, nor having nearly enough time, we chose the far more common method of seeing this spectacular sight - by boat.  (For a taste of hiking the Long Range Traverse, here is one couples' account: http://www.perceptivetravel.com/issues/1011/newfoundland.html.)

The weather was overcast and gloomy as we set out on the one-mile trail through scrubby forest and bogs that leads to the lake and boat dock, the fjord visible in the distance, the steep sides vanishing into the clouds that sat on the mountains. 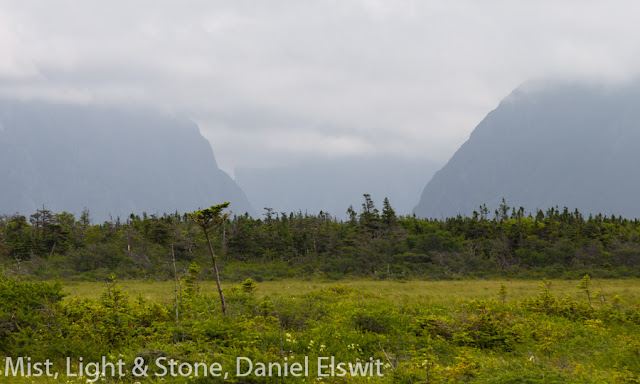 But as we approached the lake, amazingly, the clouds began to lift, revealing the enormous chasm.  By the time we got to the dock the sky was hazy, but relatively clear.  There are two boats, and photographers should try to get on the larger boat if at all possible, as it has ample outdoor seating amd standing locations.  Also, be ready for wind and waves.  Despite the relatively small size of the lake, strong winds made the water surprisingly rough. 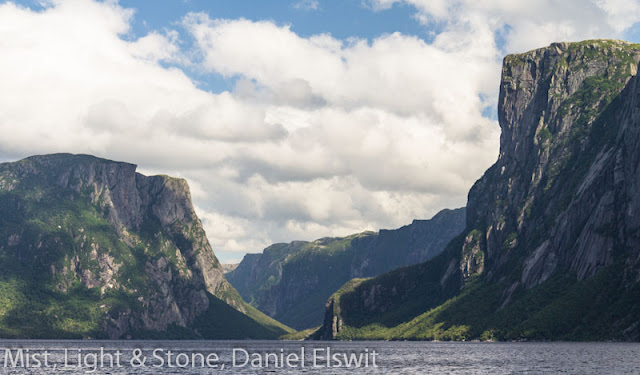 I was fortunate to have a spot standing in the bow, with an unparalelled view as we entered the canyon.  For miles the cliffs plunge nearly straight down to the water, and there are no trails (or any other signs that humans exist at all) along the shores.  I relied heavily on my polarizer to help cut through the haze and bring out the colors, and occasionally, as in the shot below, a graduated neutral density filter, to help balance the tonal range between sky and land.  At the far end of the lake I looked longingly off into the wilderness, imagining what it might be like to get off the boat at the tiny dock there and stride off into the wilderness, pack on my back, living by wits and wile (and freeze-dried food) on the windswept barrens high above. 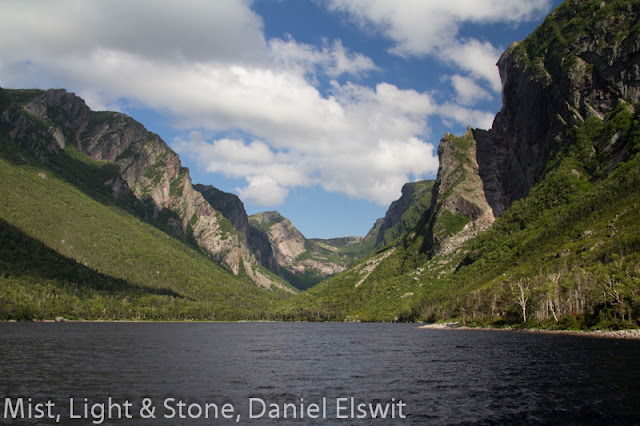 Then the boat turned and a huge wave crashed over the far side of the bow, over the heads of the people on that side of the boat, and landed directly on me, soaking me from head to foot!  Completely taken by surprise I believe I may have let loose with a string of wording unfit for such a majestic location.  I wiped the water out of my eyes, assured my concerned fellow passengers and then realized to my horror, that the camera and lens, both mid-range, non-weatherproof models, were soaked and dripping.  I quickly mopped them off with a small cloth, and was relieved to find that they still appeared to work.

The lake is largely oriented east-west, so in the late afternoon the light will be best.  The return trip down the lake, facing into the sun, allowed for some interesting silhouettes of the cliffs. 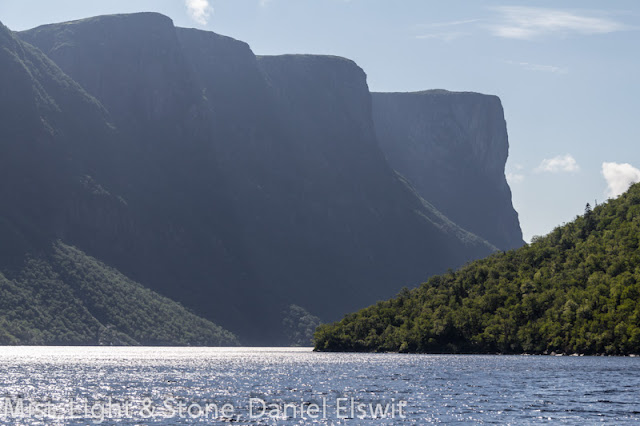 The sun was setting as we walked back through the bog, and I frequently turned to take more shots of the fading light on the mouth of the gorge. 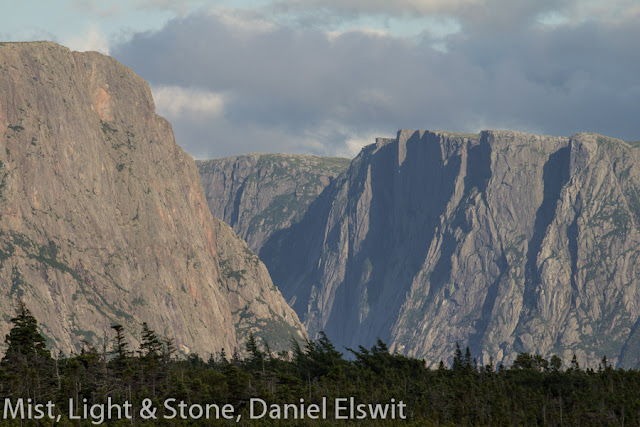 Next up: North along The Viking Trail