A look at the Lowepro Slingshot 302AW camera bag

In my seemingly never-ending quest for just the right camera bag (which has been going on for over 20 years), I've finally acquired a couple now that I really like.  For casual outings with my standard kit - DSLR and 2 or 3 lenses, I pull out my Tamrac Velocity 8x.  But for more serious endeavors - hiking some distance or carring more gear, I like to have a backpack.  Up until recently I was using a Lowepro Orion AW, which is an interesting 2-piece item, with a small daypack on top for lunch, bugspray, etc., and the bottom is a large fanny pack, where the camera gear goes.  It's very comfortable to have on, even heavily loaded.  The problem is that it's hard, though not impossible to get at the gear without putting the bag down.  One has to reach back with both hands and unfasten two clips above the hips, loosen the belt, spin the fanny pack around, and unzip it, all while trying to avoid dislocating one or both shoulders.

Lowepro's Slingshot line uses the messenger bag concept where the strap goes over the head to the opposite shoulder from the camera, and allows the photographer to loosen the strap slightly and spin the bag around to the front of the body, where a door can be opened and the camera pulled out.  (My Tamrac Velocity uses this same concept.)  But with the two smaller Slingshots, the weight still lies solely on one shoulder, which is, literally for me, a pain in the neck.  But the 302AW model also has a nice thick waistbelt to help distribute weight.  Some folks find this an annoyance because it needs to be unfastened to move the bag to the front, but this seemed a small price to pay in my own situation.

If you are new to shopping for a camera bag, here's a tip - take your gear with you when you go, to try it in your bag of choice before you buy, because any camera bag will feel quite different fully loaded than empty.  (I always ask before doing this, and also let the clerk know that I've just walked in with a bunch of my own camera gear, just so there aren't any unfortunate misunderstandings!)

The waistbelt on the Lowepro 302 works like a charm.  I've been able to happily walk for hours with it quite heavily loaded with no ill effects on my neck.  The bag has a remarkable amount of space (I use both the small upper pocket plus some of the lower area for non-photographic items) and it even has a built in raincover.  There is a tripod holder on the side opposite the flip door, but be aware that it does not appear to be designed for normal-sized tripods with lever leg releases.  My Manfrotto 190CXPRO4 which has levers, only fits with a great deal of fussing and cramming.  As with other Lowepro bags, there is a built-in micro-fiber cloth conveniently located next to the camera for cleaning lenses and LCD screens, media card holders inside the lid, and there's a small flat pocket on the outside at the top.  There are no dedicated drink holders, but I've attached a water bottle to the tripod holder clip, as well as to the belt, and once put a small bottle inside in the top.  Less-used items can go in the tertiary pocket on the front, but be careful opening that pocket with the pack "slung" to the front.  Unzip it too far, and things may fall out.  One small gripe I have is that the material on the inside of the organizers in that pocket is very slick and with the bag "slinging" from my back to my front regularly, I may open that pocket and find everything has come out of the organizers and is loose and jumbled.  Note - the main pocket has two locking straps that allow access when "slung" to the front, but which prevent unexpected wider unzippings. It is easily possible to get into the two lens compartments closest to the side door when the bag is slung in front by pulling the velcro dividers back.

Here's the outside of the bag. 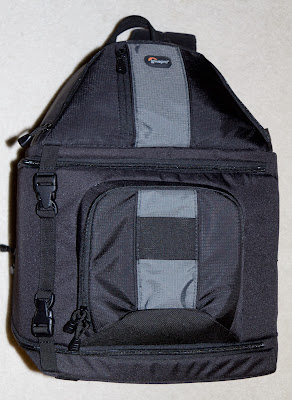 Here's the back.  Note the nice, cushy thick straps! 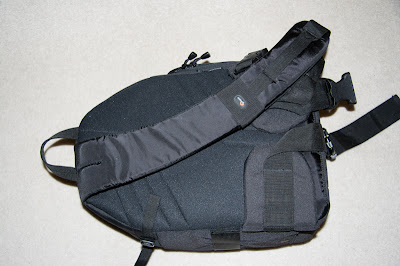 Here's what you see when the bag is slung around to your front and opened. For size comparison, that's a Canon 60D:﻿ 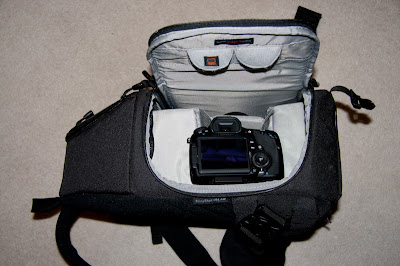 Here's the main compartment fully opened. A 17-85 is mounted on the camera in the center, the 10-22 is to the right, and the 70-200 F4L is under the shelf on the left. Mini survival kit is the orange thing at the back on the right.  There is still plenty of room on top of the 70-200 for a flash or, in my case, a very compact extra jacket often lives there.   Note that the dividers can be positioned vertically for shorter lenses, as on the right side here or horizontally for longer lenses, as on the left side. 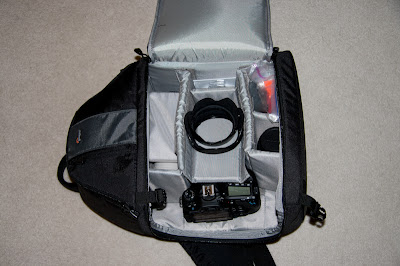 ﻿Here's my "wildlife photography" configuration.  By rearranging the velcroed partitions a little, I'm able to fit my hefty 400mm f5.6L lens on the left with a little space left on top of it.  The 70-200 F4L is mounted on the camera in the middle, with plenty of space on top of that. 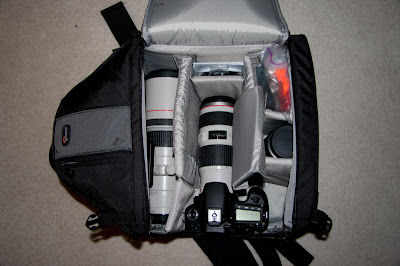 Here's the inside of the top. Just big enough for those all-important snacks.  Mesh pocket is along the back wall. 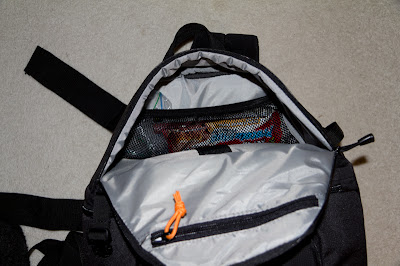 ﻿For more info and to see the bag actually in action, check out Lowepro's site (and no, they didn't pay me to post this!  I just liked their bag.)  Note that they now have an even bigger model, the 350AW, which can also hold a laptop.

Email ThisBlogThis!Share to TwitterShare to FacebookShare to Pinterest
Labels: Equipment